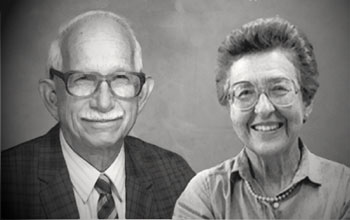 This endowment of the Population Studies Center was established in recognition of the Freedmans’ many contributions to the Center, including its founding it in 1961.

The goals of the fund are to foster social demographic research in developing countries and to promote durable ties between the Center and overseas scholars and institutions. Awards support research and training with a focus on fertility, family planning, and family dynamics. Activities may include pilot research projects, workshops, postdoctoral visits, short-term postdoctoral fellowships, and travel for collaboration.

The Freedman Fund continues the legacy of Ron and Deborah Freedman’s work.

Ronald Freedman (1917-2007) helped shape the field of demography beginning in the 1940s, working in the U.S. and Asia. The recipient of many honors and awards, he influenced generations of researchers through his work, his teaching, and his mentoring.

Deborah Selin Freedman (1918-2001) taught for many years in the University’s economics department and was also a Research Associate of the Population Studies Center. She published 27 scientific papers in leading economic and demographic journals with special emphasis on population problems in developing countries.

A video interview, Remembering a Distinguished Career: Ron Freedman Reminisces with Patrick Shields, was produced in 2002 and is available for web viewing.