Dr. Ronald Freedman, a preeminent international demographer, the U-M Roderick McKenzie Distinguished Professor Emeritus of Sociology, and founder of the Population Studies Center, died November 21, 2007 in Ann Arbor. He was 90.

Freedman helped to shape the field of demography in the late 1940s when he advocated bringing a broader sociological perspective to the study of fertility and family planning. One of the first demographers to use sample surveys in his research, he was also among the first to ask women direct questions about their childbearing intentions and preferences, and to recognize that preferences and intentions often differed from actual behavior.

During the 1950s, Freedman was instrumental in developing the Growth of American Families survey – the precursor to the current U.S. National Survey of Family Growth – data from which were key in developing population projections during a time of concern about a declining U.S. population.

In the early 1960s, Freedman shifted his interest to the developing world. His landmark experimental study of fertility in Taiwan greatly influenced family planning movements there and in other developing countries. The Taichung Experiment provided insights on both the diffusion and acceptance of information on family planning. Freedman subsequently worked with other Asian nations, including Hong Kong, Malaysia, Indonesia, Bangladesh, and the People’s Republic of China, on fertility and family planning research and programs. He also made important contributions to the World Fertility Survey, the first centralized international survey research program and the largest social science research project in history.

As in the U.S., Freedman’s work in Asia underlined the importance of viewing childbearing and contraception behavior within a broad sociological framework, influenced by the values of society and the social and economic conditions faced by each family. 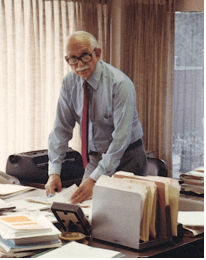 In 1961, with support from the Ford Foundation, Freedman founded the Population Studies Center (PSC) at the University of Michigan. Under his leadership, PSC established an apprenticeship system for training graduate students in demography and population study methods.

“Ronald Freedman was one of the leading social scientists of the last half of the 20th century,” said sociologist Arland Thornton, director of the Population Studies Center.

Born in Winnipeg, Canada, Freedman grew up in Waukegan, Illinois. He received a BA in history and economics from the U-M in 1939, and a master’s degree in sociology from U-M in 1940. At the University of Chicago he completed prelims for his PhD in sociology before joining the U.S. Army in 1942 to serve in the Air Corps Weather Service. Four decades later, he remarked, “When I talk about demography, I always apply what I learned as a weather forecaster – that is, don’t look out the window when you’re making a weather forecast. Short-run trends are not the significant thing.”

In a 1989 interview, Freedman said: “I think that, overall, whatever I may have contributed to the field is not so much in the substantive research I have done. The field changes… I have been fortunate enough to be in a position to take some initiatives that I think will have a lasting impact in that they influenced what other people were doing and opened whole areas of work.”

Ultimately, Freedman viewed his role in educating future generations as his most important contribution. “All of these other things pass away. What effect I’ll have in the future, I think, will be through my students and their students.”

The Ronald and Deborah Freedman Fund for International Population Activities has been established at the Population Studies Center with the intent of enriching demographic research on fertility and promoting ties between PSC and overseas scholars and institutions.

Freedman’s wife Deborah and his daughter Jane Davidson predeceased him. He is survived by his loving companion Virginia Selin, his son Joseph, daughter-in-law Maria, and son-in-law Jeff Davidson, and by grandchildren Lily Davidson, Michael Davidson and Anna Freedman, as well as by his brother Chuck (Lila), and many nieces and nephews.

Services for Freedman were held November 25, 2008 at Beth Israel Congregation at 2000 Washtenaw in Ann Arbor. A memorial service in celebration of Ron Freedman was held Friday, May 2, 2008.