The Branches and Roots of the Chitwan Valley Family Study 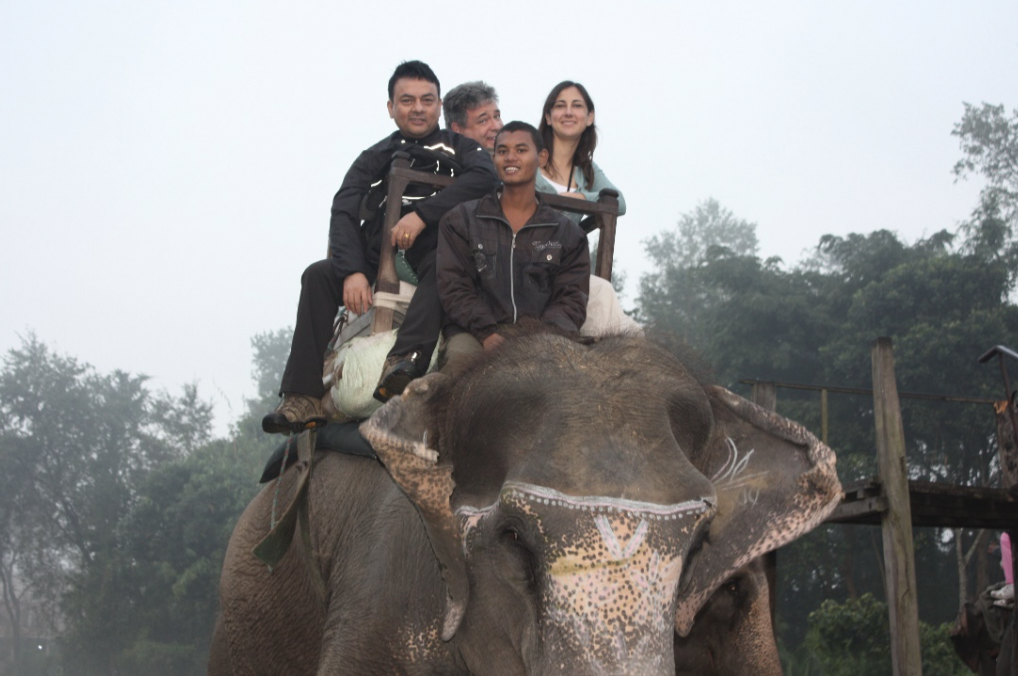 Dirgha Ghimire likes to use a tree as a metaphor for the Chitwan Valley Family Study (CVFS), the comprehensive family panel study launched in 1995 in the Chitwan Valley in Nepal and tracking individuals (wherever they move), households, and communities over decades – one of the most detailed longitudinal studies of its kind in the world. Conducted by the Institute for Social and Environmental Research – Nepal (ISER-N) and housed here at the University of Michigan’s Population Studies Center and Survey Research Center at the Institute for Social Research (ISR), its branches hold vast data collections, full life histories  for more than 10,000 individuals, a registry of over 25 years of demographic events, and investigations of family dynamics, intergenerational influences, child health, migration, agriculture and labor, mental health, environmental change, community history, and more. Extending this metaphor, Ghimire’s research partner and co-director William Axinn observes the oak outside the research center window: “I actually like the way this tree’s branches curl around and kind of get confused with each other, because it’s hard to tell what branch is what if you only look at the top part. It’s only if you follow it from the bottom up that you can trace where it came from.” More branches mean more science. An important CVFS study published this year in JAMA Psychiatry, “Community-Level Social Support Infrastructure and Adult Onset of Major Depressive Disorder in a South Asian Postconflict Setting,” (Axinn et al, 2022) examined whether community-level social infrastructure was associated with reduced incidence of major depressive disorder (MDD) among adults in this high-risk setting. Specifically, the researchers looked at the impact of living in neighborhoods with access to social support from the Small Farmers Development Program (SFDP), which uses a shared, joint-liability financial credit system among neighbors to build social capital and neighborhood cohesion. This longitudinal (10-year) cohort study of 1,917 adults in 149 high-poverty neighborhoods that had experienced armed conflict found that living in neighborhoods with access to SFDP was associated with reduced incidence of MDD. In fact, the study showed participants living in neighborhoods with an SFDP experienced incident MDD at nearly half the rate as others. In this study, the use of an international diagnostic survey as a measure of the prevalence of mental health disorders in Nepal was itself significant, Axinn points out. Prior to the invention of that survey by health science scholar Ronald Kessler, the main measure was by clinical diagnosis for people who made it to a hospital or clinic. This would affect the representativeness of the sample in any setting, but poses an even greater methodological challenge in poor countries like Nepal that have extremely limited mental health services. And this research also yielded a significant, policy-relevant result: If local social support infrastructure may reduce the incidence of MDD in settings of high exposure to potentially traumatic experiences, the researchers noted, such infrastructure should be prioritized for population-level interventions. We currently know more about individual-level social supports protecting against MDD among adults exposed to trauma than we do about community-level interventions in general populations. If we look at this study as one branch of the CVFS tree– one of more than 200 publications that have sprung from this initiative– we can actually get a view of the CVFS as a whole and see what made this study possible from the bottom up. 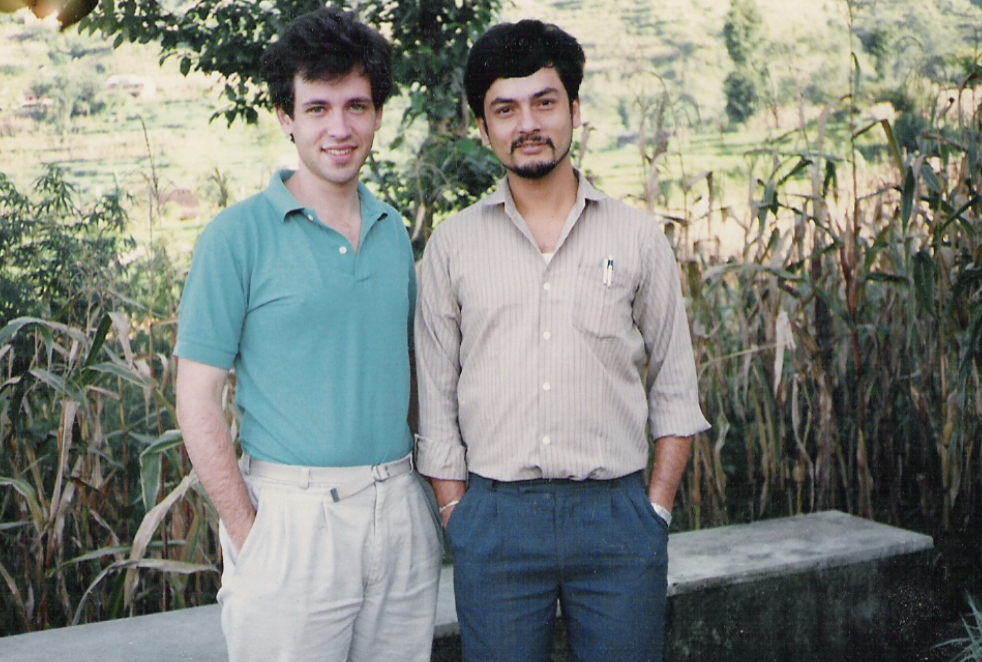 The CVFS was initially designed to investigate the influence of changing community and household contexts on population outcomes such as marital and childbearing processes. But in fact the roots of this tree, which extend 7,500 miles across the globe, date back as far as 1976, when the Nepalese ambassador to the U.S. recruited Axinn’s parents to run a USAID-funded project to build Nepal’s first agricultural college in Chitwan. Themselves professional partners for more than 60 years, George and Nancy Axinn were scholar-practitioners of international development at MSU, committed to rural development in developing nations. So the Axinns moved to Nepal when William was 12 years old, his father later serving as the Food and Agriculture Organization (FAO) Representative to Nepal. During his years of college and graduate studies in sociology at Cornell and the University of Michigan, William Axinn later traveled home to Nepal twice a year and began his own research there, interviewing and hiring Dirgha Ghimire at Chitwan’s Rampur Campus to become his undergraduate research assistant in 1985. In this early collaboration (which became a chapter in Axinn’s dissertation), Axinn and Ghimire studied and confirmed the impact of that same successful FAO program, the Small Farmers Development Program (SFDP), on contraceptive use among its members. Axinn and Ghimire followed the story of various agencies and family planning initiatives of the UN and USAID using the SFDP as a channel to achieve their goal to curb population explosion in the face of hunger. Their qualitative findings were published in 1992, the same year Axinn won an NSF Young Investigator Award to pilot the research that led to the formal establishment of the CVFS in 1995. While Axinn completed his PhD at UM in 1990 and completed his dissertation research as a PSC trainee, early research that led to the launch of CVFS took place at the University of Chicago (1990-1994), and the first NIH grants to launch CVFS field work were given to the Pennsylvania State University, where Axinn worked from 1994-1998 and where Ghimire began his PhD. 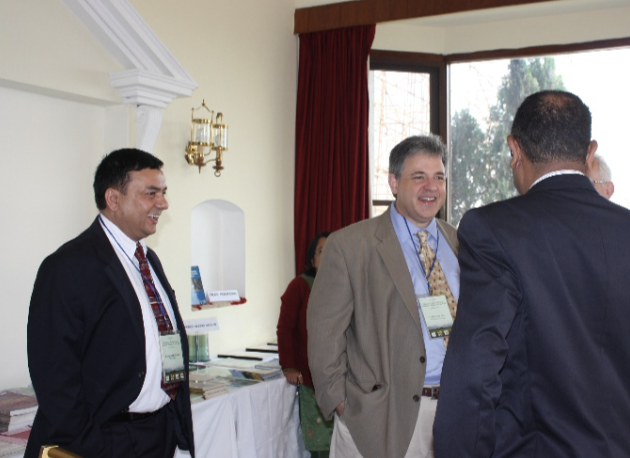 As demographers and family sociologists (Ghimire completing his doctorate in that field at U-M in 2003), Axinn and Ghimire started CVFS with a particular interest in studying the local community in which neighborhoods live together– following individuals, households, and communities across time. Ghimire’s pivot to a research career came after the frustration of “witnessing persistent failure of policies and programs aimed at improving human wellbeing and environmental conditions in low-income settings.” Axinn and Ghimire’s work has yielded a repository of publicly accessible and restricted-use data whose breadth and depth provide “endless possibilities” for now hundreds of data users. Data sets that enabled the JAMA study included the neighborhood history calendar that allowed the researchers to track the local access to membership in the SFDP over time, since 1977. The CVFS also collects individual life history calendars from participants, along with diagnostic interviews to assess mental health– a pairing that allows researchers to look at the lifetime history of mental health impairments and the timing of their onset, an important mechanism for understanding the impact of a decade of medium-intensity armed conflict in Nepal (1996-2006). Such data yield findings that are useful to society– especially in resource-poor settings. Among others, recent studies from the CVFS have looked at the impact of Covid worries on Covid-mitigating behaviors; the impact of arranged marriage on mental health, and how women in Nepal learn they are pregnant. And from the seed that landed the Axinn family in Chitwan Valley 45 years ago, the CVFS is still branching. Currently researchers are fielding a web-based panel study of the transition to adulthood (ages 15-24), which, among other topics, will be the first-ever web survey to examine premarital sex in Nepal. CVFS research is also extending to study elderly health and dementia. To learn more about the CVFS, you can visit the CVFS website, which includes videos from its 2021-2022 webinar series (supported by NICHD R25 HD101358) as well as troves of available data. The CVFS is supported by multiple grants from the National Institute of Child Health and Human Development, the National Science Foundation, the National Institute of Mental Health, the Department for International Development and Economic and Social Research Council, UK, and the Population Studies Center, the research center at ISR that houses the CVFS.