Latina/o Postsecondary Education: Trends in Racial/ Ethnic Education Gaps and the Role of Citizenship in Access to Higher Education

This content appeared originally in the 2022 Annual Report of the Stone Center for Inequality Dynamics (CID). CID student affiliates Shauna Dyer and Giovanni Román-Torres published “Latina/o Postsecondary Education: Trends in Racial/Ethnic Education Gaps and the Role of Citizenship in Access to Higher Education” in CID’s discussion paper series. Giovanni Román-Torres is a PSC graduate trainee and an ISR Next Generation awardee whose study on the belonging of Latina/o immigrants in the South and their socioeconomic well-being is supported by the Marshall Weinberg Endowment. 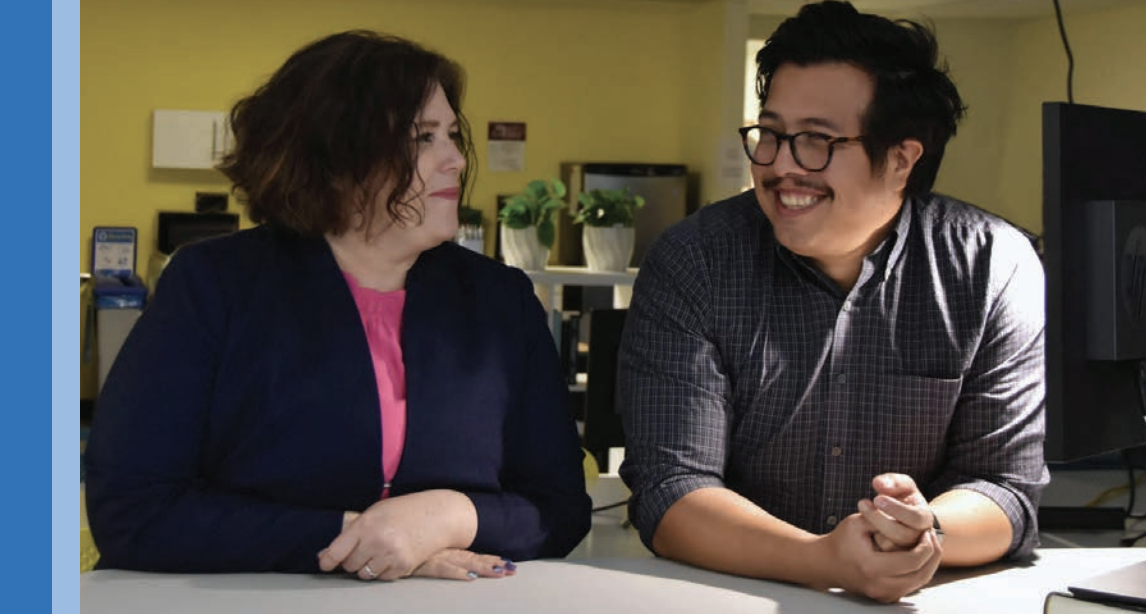 They sat down with CID to discuss their inspiration and process.

CID: What is your paper about?

Shauna: Our paper looks at trends in college graduation rates for White, Black, Latina/o men and women. We break apart what proportion of the Black-Latina/o and White-Latina/o bachelor’s degree gaps that exist can be explained by differences between enrolling in college and completing college once enrolled. We found enrollment differences explain most of the bachelor degree gaps.

We know from law changes and other research that it has become harder for Latinos to become citizens in the U.S. over time, so citizenship has become more important as a barrier. The paper is a decomposition analysis that used data from a 70-year period from the U.S. Census. It’s a descriptive finding, but it’s still really useful because that is a huge indicator of where inequalities lie.

CID: Why was it important to you to study this?

Giovanni: For me, it’s important because my entire dissertation is focused on these topics. On a personal level, both because I am Latino and my parents are immigrants. I also went through the educational system here when I wasn’t aware of these issues. It wasn’t until college – through the mentorship of professors at community college – that I became more interested in issues affecting Latinos. Whether it’s labor, immigration, education – they’re all tied together one way or another

My main focus was on education – it’s shifted now, but Shauna and I were both taking a class together and we had discussed my research interest in education.

On the professional side, I was and still am very interested in describing and finding out what the sources of these inequalities are that I care about – one of them being education. What we discovered through our paper, and what we hope to continue working on together, is that citizenship status plays an enormous role in what we care about, such as education.

Shauna: I think, similar to Gio, it starts from a personal place for me. Coming from a disadvantaged background, I enrolled in college, dropped out, and did not finish until I was 30. Similar to Gio, I had no idea that there were reasons that explained why I struggled so much to finish college. I got into graduate school and was really interested in promoting intergenerational mobility – what are the barriers to getting a college education? I knew about the issues of first generation students and students that grew up in poverty – these issues are really relevant to me. I wanted to expand that view, and it really showed me how important racial inequality is.

Gio and I are native Californians – even though I’m not Latina, it’s such a large portion of the population in California that it is near and dear to my heart. This is a population that I want to see succeed. One of the other motivations is that we both believe there is so little work done on Latinos in comparison to White and Black populations – it’s mind boggling. It’s mind boggling that our paper hasn’t been done before.

CID: What remaining questions should be addressed by future research on this topic?

Shauna: We need to do comparisons between Asian immigrants and Latino immigrants. We have to approach it really carefully because of the whole model minority stereotype that’s specific to Asians. They are the model minority – the ‘good’ minorities because they work white-collar jobs.

Giovanni: Exactly, because according to this stereotype, they are hard working and not lazy like Latinos. None of these stereotypes are true, but they have been leveraged historically and even today to explain why certain groups are disadvantaged. The reality is more complicated and sourced in generations of exclusion

At some point, I would also like to focus on ‘the Vanishing Latino college student’ – focusing on Latinos specifically. Both among Whites and Blacks, it has been shown that women are receiving more college degrees than men. The same is true for Latinos, as we show in our paper. The remaining question is why.

Shauna Dyer is a Ph.D. candidate in sociology at the University of Michigan and a predoctoral trainee at the Population Studies Center at the Institute for Social Research. She studies educational and employment inequalities. Her research focuses on inequalities in employment and postsecondary education across gender and racialized/ethnic groups. Her work centers on three strands of research: 1) Job Quality, defined as employer-provided benefits and scheduling option, 2) Racialized/ Ethnic Inequality, specifically Latina/o inequality, in the United States, and 3) Intergenerational Persistence via educational attainment.

Giovanni Román-Torres is a Ph.D. candidate in sociology at U-M and predoctoral trainee at the Population Studies Center within the Institute for Social Research. His research engages broadly with issues of social mobility, stratification, immigration, and spatial inequality, with a particular interest in Latina/os in the United States. His primary research projects employ mixed-methods to study historical changes in recent Latina/o immigrant destinations across the United States, the relationship between Latina/o immigration replenishment and the spatial assimilation of Latina/os in the U.S. South, and how Latina/o immigrants establish a sense of belonging in geographies that are historically Black and White (e.g., the U.S. South). Other research that he is currently engaged in investigates the effects of mobility on individual outcomes, historical trends in the gender gap in college completion among Latina/os in the U.S. and estimating the historical naturalization rates of immigrants in the U.S.